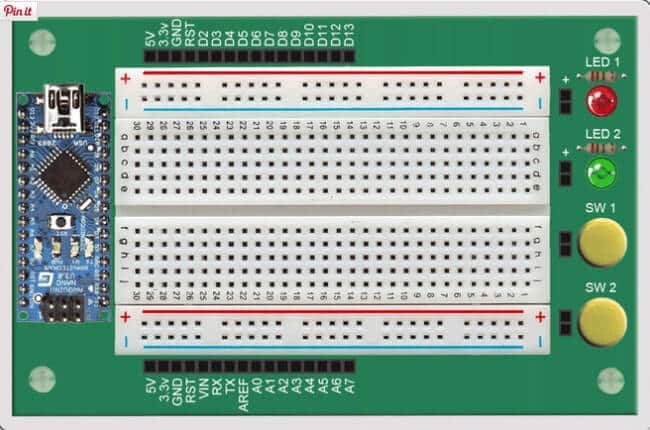 If you are in the process of developing your own electronic projects, you are most likely using either Arduino or Raspberry Pi. The two prominent development boards have not only made electronic development easier for makers but also established the “open-source” movement. However, while Arduino has indeed lowered the threshold for those who want to build their own electronic projects, it still requires some basic understanding of electronics in order to have a successful experience with Arduino. Luckily, one veteran maker, Jeff Shapiro, comes up with an Arduino learning package for anyone to enjoy a smooth start developing their projects with Arduino.

The package is made up of three main components: an Arduino learning board, a package of 15 sensors and components, and a set of step-by-step video tutorials. The board is designed by Shapiro after he uses Arduino to prototype numerous projects, and he hopes this learning board can help others to have a smooth start in creating their own projects. But what exactly does the learning board contain? It has an Arduino Nano, a breadboard that does not require soldering, and all the pins of Arduino. The only difference is that the pins become headers on the side of the learning board, and according to Shapiro, that area is meant to be the prototyping area. Additionally, the board also comes with 2 LEDs and 2 switches that can come into use in projects.

On top of that, the package also comes with access to a series of tutorial video provided by Shapiro. The online courses are offered in a modular style, which lets users explore topics that interest them and watch it at their own pace. The lessons cover topics from how to properly use the learning board to writing programming languages and other more advanced skills. Shapiro plans to release the courses in a partnership with Udemy.

If you happen to be a maker looking for some instruction about how to properly use Arduino, why not check out or even back Shapiro’s project on Kickstarter. Stay tuned, because TechDesign will be bringing you more Kickstarter campaigns like this in the coming weeks.