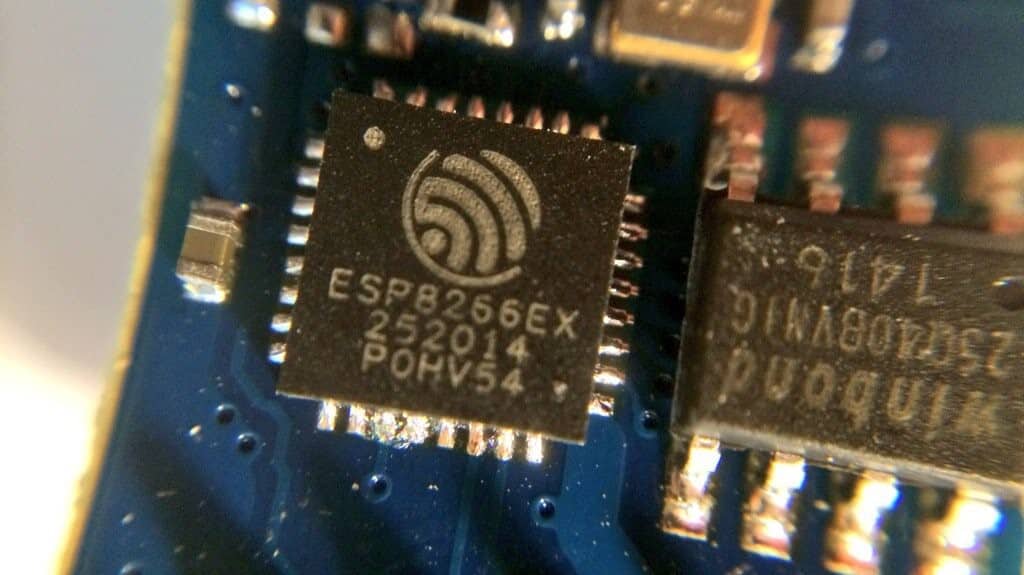 In maker community, ESP8266 is well-known to everyone. The development kits for this Wi-Fi chip have been pretty famous in recent years and also made communication chip manufacturers stressful to figure out why it becomes so popular?

Being cheap is definitely a great breakthrough. Wired editor, Chris Anderson, had a speech on TED in 2010 “Technology’s Long Tail” talking about the 4 key points of technology market development, one of which is price. DVD is a good example. As the price decreased to a level lower than the mental obstacle, this market got a boost.

It is so cheap that people would be willing to give it a try. Even if you break it, you won’t feel you are wasting much money. That is the 1st step of ESP8266 to succeed.

2. Do Something Different
The 2nd step is to do something different. Even if you break it, you won’t feel you are wasting money. So some people started trying to apply the chip in “unusual” ways. In general, Wi-Fi transmission is usually used between 60 to 140 meters, but some people apply it to 366 meters (PCB antenna), 479 meter (exterior antenna). And then they uploaded the video to YouTube (2014, video) and had more people to know ESP8266.

3. More compatible development environments
Since more and more people knew, bought, and tried using ESP8266, they found the disadvantage of the chip and tried to improve it. For example, to develop ESP8266, people had to understand FreeRTOS and coded with the professional C language. But an Arduino IDE plug-in was then developed so that developers can use Arduino IDE to write ESP8266 command code to diminish the difficulty of development.

The compatibility of Arduino development is a great milestone. Afterwards, more software engineers proposed new ways to develop ESP8266, such as using eLua language in NodeMCU project, using JavaScript in Smart.js project and convert the project to Mongoose IoT Firmware, and using Python in MicroPython project.

4. Flexible Design and Enhanced Function
Besides the software progressive contributed by the community, ESP8266 chip and board have been enhanced as well, like chip clock rate acceleration, a new analog digital converter (ADC) to improve the sensitivity. Connecting with soil humidity sensor is a common application.

As to the boards, AI Thinker also has a series of inexpensive boards, named as ESP-xx. Numbers stand for the selections for antenna, pin count, verification, and external memory. Thus, ESP8266 is able to update the firmware through Wi-Fi (so-called OTA, Over-The-Aire). Also, the vendors, Adafrut and SparkFun that are famous to makers, sells ESP8266 boards so that it does increase end user confidence.

5. Abundant Learning Resources
ESP8266 is from Expressif, located in Shanghai so that there’s only chip information available in Chinese at the beginning. But as it became more famous, the related information was translated to English, helping the global promotion.

Due to the growing attention on ESP8266, textbook publisher got interest to introduce the new chip. O’reilly’s English version now is available. The related topics and books in Japanese, Arabic, Italian, etc all can be found on the market.

Moreover, there are increasingly ESP8266 projects shared on Maker Projects platforms, helping makers hands-on and then sharing their projects on it, like snowball effect. (refer to Instractuble ESP8266 project and Hackster.io)

6. Convenient Application Development
Seeed Studio, a famous maker vendor in ShenZheng, built Wio Link, to enhance ESP8266 with software and hardware. Wio Link is a board with ESP8266 chip and 6 Grove module connectors that can connect 6 Grove sensors. (Grove connector, built and promoted by Seeed Studio, is suitable for Seeed Studio series boards.)

Besides, the connection settings with Grove module can be done via smartphone app, and then the settings can be updated to Wio Link board through Wi-Fi. Also, it provides RESTful API for programs to access. Various programming languages, thus, can be used to develop ESP8266, such as JavaScript, Java, Python, Objective C (common programming language on Mac and iOS), PHP, Ruby, etc. API can be applied to smartphone, webpage, and even IFTTT.

So now it has become quite easy to develop with ESP8266. In terms of hardware, makers only need to plug and use, and all the tough tasks used to be required in professional electronic engineering are all saved. Makers can use the simple command program and even smartphone app to set up.

7. Incentive program
Online incentive programs also accelerated the ESP8266 software development. For example, anyone who can implement some function or application with ESP8266 will get the prize. Besides, Expressif also has an incentive program that once anyone who finds bug in the SDK and got approve will get cash USD$1000 – 2000 in cash prize.

8. Active maker community
Like what we’ve mentioned above, both official and unofficial maker communities eagerly share and discuss the related topics. The active communities will create a positive cycle on the conditions above. So far the official doesn’t need to hold any campaigns but the community will have their own activities.

Conclusion
ESP8266 is not perfect, of course. Expressif is still a young company in Wi-Fi chip market, and the chip hardware functions haven’t been completed, like decoding. That is why ESP8266 is not easy to be accepted by large scale brand name companies.

The weak cyber security might cause damages accidentally, and the large compensation will be resulted. Thus, vendors would not be willing to take risk. Also, the advantage of lower prize does not take effect on this market. In this industry, traditional Wi-Fi chip manufacturers, like Qualcomm, Broadcom, Marvell, MediaTek, Realtek, etc, still dominate the market.

In terms of prospect, ESP8266 still can be improved no matter in software or hardware. As to hardware chip, Expressif has advanced chip, ESP32, equipped with Wi-Fi and Bluetooth. On the other hand, ESP8266 can be simplified in software. For example, some users have used Scratch to support ESP8266 in a blocky and visual way. That will help more younger users to develop with ESP8266.

But, everything is possible in the maker community. ESP8266 now is extremely popular, but what about future? Keep observing on it!

Have any other hardware development problems? Let TechDesign professional project managers provide the consultation for you!