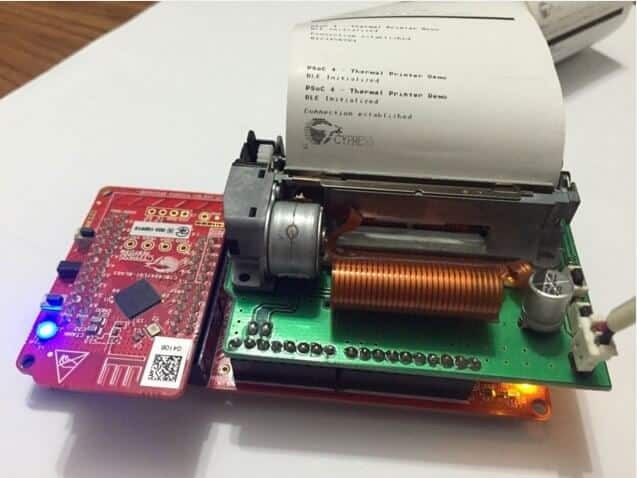 If you know something about printers, then you probably will agree with me that thermal printers will soon be out of the market. With the advancement of relevant technologies, thermal printers just seem to be out of date and unable to keep up with customers’ demands. A quick search of existing thermal printers on Amazon shows that the current price generally sits at $160 USD. But seriously, will you spend that much money for an outdated printer, or you would rather spend it on something more useful? The truth is thermal printers are so basic that you can just build it by yourself. It is exactly what a fellow maker did with CY8CKIT-042BLE and PSoC Creator.

The idea of owning a thermal printer was ignited when Winston Fernandes saw some IoT thermal printers built by Raspberry Pi. He thought about building one for himself to print out small sheets of papers like shopping lists, notes, and phone numbers. As a self-proclaimed geek, Fernandes decided to stay away from the serial interface printer module and went for CY8CKIT-042BLE.

He began the project by making a shield that can fit onto CY8CKIT-042BLE, but then suddenly, he had a different idea. He wanted to try to use a UDB. Even though he is not really familiar with Verilog and UDB, but with the help of PSoC Creator, he was still able to complete the Feed Motor Driving and Strobe signal part of the thermal printer.

He designed a whole set of logic to move the motor and activate strobe signals so the printer can print dots and lines. As for the rest, are all taken care of by the firmware. While the features of the printer are still pretty basic, Fernandes plans to develop a fully functional printer with supporting fonts and command based interface in the near future.

Are you curious about the detail of this project? You can learn about it through its complete profile on hackster.io. Of course, if you think it is too much trouble building a printer with boards and wires, you can always get a functioning one on Amazon. As always, we hope you find this project informative and interesting. We will come back with more maker projects in the coming weeks, so stay tuned.