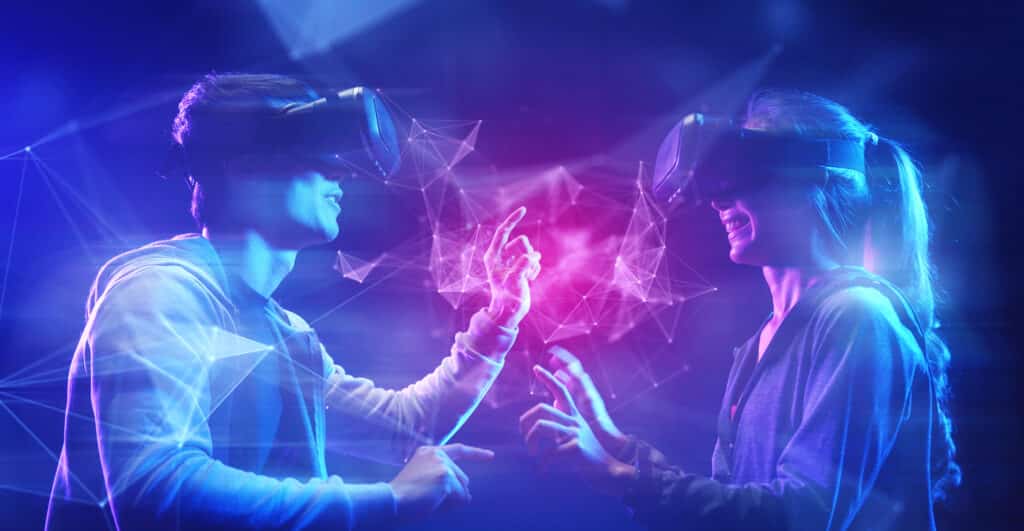 The metaverse, a recently super-hot searching word after Mark Zuckerberg, CEO of Facebook, announced his company brand changing from Facebook to Meta Platforms. Metaverse is a compound word of “meta” and “universe”; while “meta” refers to “transcending”, hence “metaverse” refers to “beyond the universe”.

The metaverse is not a brand-new concept. AR, VR, and even Microsoft Teams are part of the implementing process of the metaverse. Paralleling the current universe, it is the ultimate goal that all the tech giants are pursuing. In abbreviation, the metaverse is a virtual world that is interoperable, interactive, immersive, and at the same time deeply linking to the real world. Imagine you can actually shop and work and entertain in cyberspace; with wearing a headset, a completely different world will unfold in front of you. That’s right, the story of science fiction may come to reality in the future.

Here we are going to introduce the metaverse strategies and plans of the companies that put the most effort into it, which are Meta Platforms, NVIDIA, Microsoft, Apple, Disney, Epic Games, Sony, Roblox, and Tencent.

Mark Zuckerberg has just renamed his company from Facebook to Meta Platforms and shown his determination of turning the social media company into a metaverse company. In 2020, he has invested USD 18.5 billion in research and development (around USD 10 billion in the metaverse division), and the amount will expect to be increasing continuously. Originated from the internet social interaction platform, Meta has the most valuable asset to the metaverse: people.

Recently Zuckerberg has indicated his vision of the metaverse in an interview: embodied internet. In the future, people can break the temporal and spatial limitations in every aspect, and you can feel present with people from other places. The concept of “infinite office” and “shared-space meeting” can be realized, and the ultimate way of social interaction may be like what Zuckerberg said, “You can teleport instantaneously” to anywhere you want to be.

Everything Facebook revealed about the Metaverse in 11 minutes (Source: CNET)

NVIDIA has always been famous for its expertise in graphics, so it is not surprising that NVIDIA is eager to participate in the “metaverse revolution”. It considers the metaverse as a platform that is beyond the conventional notion of space, neither physical nor digital, and NVIDIA Omniverse is the one to realize it. In brief, NVIDIA Omniverse includes 3 parts: database engine Omniverse Nucleus to describe and interchange the 3D basic elements; RTX graphics technologies to simulate the virtual reality; and NVIDIA CloudXR to let users put data into and stream content out of the Omniverse.

Foster + Partners, the leading architecture company that designed the headquarters of Apple, has collaborated with NVIDIA to construct buildings within Omniverse. Another famous use case is the BMW virtual automotive factory. Powered by Omniverse, BMW’s virtual automotive factory lets engineers from different countries simulate and optimize the product lines together in real time, without traveling needed. Omniverse also provides digital human and robot simulations to show how workers can improve their productivity in the real world. The video below demonstrates more details of the factory.

NVIDIA Omniverse – Designing, Optimizing and Operating the Factory of the Future (Source: NVIDIA)

Microsoft started its metaverse-related project way earlier than many other companies. In late 2016, the first generation of HoloLens, a glasses-resembled AR headset with Windows Mixed Reality platform, had already been released to the public. With the HoloLens, users can play video games, visit various spots, learn new knowledge, and check the 3D virtual products while designing, which are similar to what the metaverse can provide at the initial stage, just then the word “metaverse” was not as popular as it is now.

After all these years, Microsoft has come up with HoloLens2, as well as provided Microsoft Mesh service. Microsoft Mesh claims to let users feel presence, experience together, and connect from everywhere, which has again depicted the concept of the metaverse. Other than making teleconferences more real, Microsoft also has the stunning technology Holoportation. Holoportation allows people to be modeled and teleported anywhere instantly; teleporting professionals to solve problems will no longer be a dream. In 2024, HoloLens 3 will be launched, and more fascinating functions can surely be expected.

Being one of the largest smartphone providers, the fastest way for Apple to enter the field of metaverse would be hardware penetration – through iPhone replacement – as it has sold more than 42 million units in 2021 Q2. Recently the Taiwanese Apple analyst Ming-Chi Kuo noted that Apple will launch its first AR wearable in 2022 Q4, and this device will be equipped with a higher-end and a lower-end processor; while one is for general computing, and the other is for sensor-based computing. Besides, Kuo also pointed out that Apple has further planned to replace iPhones with AR wearables in 10 years.

When other companies scrambling devoted sources to the metaverse, Apple was the one which remained silent. Finally, there is information released. With super advanced hardware design capabilities, let’s just need to wait until the end of 2022 and see what Apple will offer.

The strength of Disney is obviously content. As a leader in the entertainment industry, Disney is eager to bring people into its joyful magic world. How fantastic it will be to link the real world with those adorable characters in the digital world! In 2020, Tilak Mandadi, the former executive vice president of digital in Disney, has indicated to create a theme park where the real world and virtual world can meet each other. Picture how much it will enrich the user experiences if the metaverse comes true in a Disneyland.

Although Disney is still in its very early stage of getting into the metaverse, it is worth looking forward to observing what will come next in Disney. Perhaps just like Aladdin told us: a whole new world, a dazzling place we never knew.

Sony will surely be a part of this development as it owns so many core technologies to the metaverse. The PlayStation VR headset has brought many users into the impressive virtual world, and it is expected that the next generation of it will be equipped with more functions related to the metaverse. Not only devoted to the gaming field, but Sony also cooperated with Manchester City to build up a virtual stadium based on the real one. In this virtual stadium, fans can enjoy digital experiences along with some interactive activities.

More than that, Sony Music Entertainment also partnered with Roblox for further virtual performances or concerts. In fact, Sony has not explicitly announced the strategy towards the metaverse, but it obviously will not be absent in the market.

Epic Games owns a huge number of users thanks to one of the most popular games in the world – Fortnite. Fortnite is an online video game which is available for Windows, Mac OS, PlayStation 4, and Xbox One, and recently Fortnite Party Worlds were introduced to users for sharing virtual social spaces and hanging out with friends. Tim Sweeney, the CEO of Epic, thinks the company with the most users will be the one setting standards for the metaverse. Hence, he has planned to enlarge the user base from monthly 60 million to a billion.

Another way for Epic to be involved in the metaverse would be providing building blocks with its Unreal Engine tools. Sweeney indicated that Epic is working hard to create digital assets for designers on films and games.

Research has pointed out in 2020, half of the Americans under 16 years old played Roblox. If what Sweeney said is true, Roblox has the edge of managing a huge user base already. Currently, there are over 40 million games on its platform, and new games are coming out every month. “Robux”, the virtual currency in the world of Roblox has already been popular among millions of users.

Overall, the goal of Roblox is to shift from an online game platform to an environment for various kinds of metaverses to exist. For instance, NFL has opened a virtual store and Nike has opened a virtual space “Nikeland” on Roblox, respectively. Moreover, users can find online lessons and concerts there as well. Roblox realizes the virtual concerts by collaborating with Sony Music Entertainment as mentioned above. With large numbers of users, Roblox indeed stands on quite a niche point on the way to the metaverse.

Tencent believes that the metaverse will be driven by online games and software technologies, while the hardware will merely present a supporting role. Therefore, it has already largely invested in several gaming companies such as Epic Games and Roblox, and it even got the license from Roblox to operate Roblox China.

Tencent has not yet announced specific strategies, but it has registered two trademarks “TiMi metaverse” (天美元宇宙) and “King’s metaverse” (王者元宇宙). With so many actions, it is apparent Tencent will be taking an essential part in the metaverse market.

There are still other companies developing the strategies but not being mentioned due to the limited expected article length, like Google, Bytedance, Alibaba, and so on. Amazon may also play an important role in the “shopping metaverse”. However, the most active companies in the metaverse have been introduced above.

TECHDesign believes there will be multiple metaverses in the future, and they will not belong to a single company. Every participating company will join the metaverse based on its strength. These companies will compete and cooperate; just like what Sweeney said, “The metaverse is a term like the internet. No company can own it.”